This was a year in which a spate of overly biographical reviews nearly ruined certain records for me. As a listener, I have no interest in the actual biographies of artists. I have no interest in listening to songs about anyone’s actual parents, just like I have no interest in listening to songs about Matthew Barney or Andy Samberg. I find musicians’ biographies pretty boring anyway. A lot of them have fairly similar backgrounds and routines, and the more we obsess over their biographies in our reviews and features, the more we reduce the scope of each record to meditations on their careers, their ‘artistry’, the recording process itself: a horizon of interpretation that extends little further than the studio’s soundproofed walls. 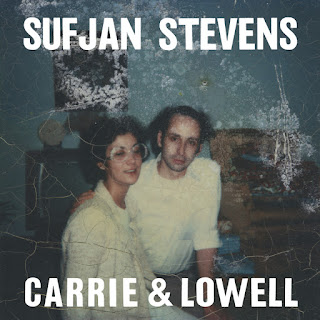 More to the point though, I would argue that this kind of biographical listening is a doomed pursuit anyway. For example, none of the general listenership actually know Sufjan Stevens’s family, the purported subjects of Carrie & Lowell, just as none of us know Sufjan. Thankfully, we do not need to know them (or even try/pretend to know them) to understand, enjoy or value the music.

This is not to say that such records don’t play with the fictionalised biographies of fictional personas. No doubt there are parents on the record. No doubt there is a son who has lost his mother. We can listen for this son and this mother in consecutive songs and imagine their biographies in the silences between. However, this is not the real Sufjan or the real Carrie; these characters are already composites of the clues on the record (and perhaps in photos, interviews, press releases) and all the mothers and sons (perhaps our own, perhaps ourselves) that we know. Maybe, for real Sufjan, this record was an exercise in autobiography. There is still no way that this can be communicated to the listener in any meaningful way: songs are always fictions.

The distinction between these totally subjective, fictionalised biographies and the impossible knowledge of the ‘real’ history behind the record is a very important one. Brandon Stosuy’s review on Pitchfork took a highly prurient approach, mentioning Carrie’s mental health problems and addictions, and then analysing the photos of her included in the record, speculating on her relationship with her family on the basis of a few snapshots. It was a typical critical attempt at authority — at being in command of all the available ‘evidence’ in order to make the most authoritative judgement — and displayed a particularly prevalent Pitchfork trend, when writing positive reviews, to reflect the perceived cogency or unified vision of an album by funnelling artist psychoanalysis into trite universalism, as if proving an album’s quality requires its translation into a short story. (In the same review, Stosuy unforgiveably describes the record as Sufjan’s ‘most classic and pure effort’. Bleurgh.)

The review made a caricature of the record and eventually invited comment from the eponymous Lowell Brams himself, who corrected these speculations with more context about the photos in question. However, bringing in Brams’s testimony only pushes the discourse further away from the characters as they appear in the words and sounds on the record. Carrie and Lowell are real people, but that’s practically irrelevant (and none of our business). Real people will always be far less interesting and romantic than we imagine, but also far more valuable and important: too important to be summed up in a press release and a few photos. On the other hand, the ‘Carrie’ and ‘Lowell’ for whom we still cry when we play the record for the 20th time are unique to each of us.

These overly biographical reviews nearly ruined Carrie & Lowell for me (I know, I’m an idiot for reading them, but I couldn’t exactly unread them…). However, the record won through, and it did so because of its redeployment of some uniquely Sufjan qualities…


Search for things to extol
Friend, the fables delight me
— ‘Blue Bucket Of Gold’

Perhaps inevitably, Carrie & Lowell still reminds me of The Antlers’ Hospice, another album about death. On Hospice’s second track, ‘Kettering’, the gently pulsing piano repeatedly lifts from a minor chord (i) to the relative major chord (III), before crumpling back down to the minor. The initial harmonic shift represents a small moment of hope that is immediately dashed, only to be repeated, again and again, until its artificiality becomes deeply pathetic. Carrie & Lowell is full of tracks that navigate similar harmonic shifts from minor to major. The ubiquitous finger-picked guitar allows a single chord to be sustained, animated by the internal rhythm of the finger-picking pattern, resulting in a kind of active stillness. These elongated moments of stillness allow us to feel the effort required for each chord change. Thus, on Carrie & Lowell, we hear Sufjan laboriously tuning his own mood, steering carefully through memories and thoughts as he processes them in real time. Moreover, we sense the incredible precariousness of this self-guided therapy.

The album’s most direct and devastating song about death, ‘Fourth of July’, is its answer to ‘Kettering’; gently pulsing electric piano replaces finger-picking as a way of marking the stillness, proceeding through a similar descending progression with the same feeling of inevitability. Into this progression, the verse interpolates a rising melody that conjures murmurs of hope from the piano, although these collapse gently back into the same darkening motif, which is ultimately vocalised in the coda: ‘We’re all gonna die’. Elsewhere, the emergence of each song structure results from the containment or abandonment of the vocal. Take, for example, the unchecked vocal exclamation that pushes ‘Death With Dignity’ from verse to chorus (and into a less controlled falsetto register): ‘Again I’ve lost my strength completely’. In contrast, the chorus of ‘Should Have Known Better’ is initiated not by a moment of lost control but by an act of sheer vocal effort— the hum and ‘oh’, which pushes the harmonic progression from the dark reflections of the verse and cuts the bridge off short, ushering in the brighter prayer of the refrain: ‘Be my rest, be my fantasy’.


Small-scale harmonic and structural events like these suggest Sufjan working through his feelings phrase by phrase. The most celebrated example is probably the final verse of ‘Should Have Known Better’, with its unambiguously positive reharmonisation that grows in stability and security with the gradual addition of instrumental forces. Many reviews have cited the line ‘My brother had a daughter/The beauty that she brings, illumination’ as the key to this optimism, but this moment is much more than the Deathly Hallows/Mockingjay Part 2-style baby’s-face-as-circle-of-life trope this suggests. What I love about this verse is that it is a classic Sufjan coda (cf. ‘The Predatory Wasp…’ or ‘The Transfiguration’), repurposed to provide succour in the very personal situation described in the song.


Don’t back down, concentrate on seeing
The breakers in the bar, the neighbor’s greeting
— ‘Should Have Known Better’

Like so much of Sufjan’s work, Carrie & Lowell is also about faith (not to mention faith in faith) and, again, its precariousness. The birth of a niece is just one image in the tapestry of ‘signs and wonders’ that holds the album together. Visions and auguries elicit abrupt mood shifts in the emotional contours of the song structures, catalysing crises as well as epiphanies. As with all Sufjan songs, the lyrics are replete with isolated apparitions: ‘head of a rabbit’, ‘five red hens’, ‘a dead horse’, ‘flight of a one-winged dove’. In the album’s most overt meditation on faith, ‘The Only Thing’, these ‘signs and wonders’ are the only thing that keeps the singer from killing himself: ‘Perseus aligned with the skull…water stain writing the wall…everything I see returns to you somehow’.

Throughout the album, we get the sense of Sufjan turning to these signs or visions for meaning — not necessarily a particular meaning so much as the promise of meaning itself. Hence, these images aren’t simple metaphors, nor are they omens to be interpreted; they are invoked self-consciously as magic words, incantations, whose effect is felt in their very utterance. In the gap left by the inarticulable sorrow of loss, the very opacity of these symbols has a sublime and numinous quality. The strategy recalls the Blake-light rhetoric of Sufjan’s early albums, elevating contemporary Americana to a mythic status and investing it with millenarian promise (Sufjan’s debt to literary Romanticism is acknowledged as far back as ‘Wordsworth’s Ridge’ on A Sun Came!). But here, the stakes are much higher. Where once Sufjan followed Ginsberg in his playful illumination of American mundanity, now he’s following his own teaching as a survival strategy, always on the cusp of despair.


Returning to ‘Fourth of July’, then, we have the album’s most overt acknowledgement of this strategy, whereby the scene of death is embedded within the singular significance of a calendar holiday, just as on Illinois’s ‘Casimir Pulaski Day’ (the Sufjan track on which the precariousness of the singer’s faith is most apparent). For me, the most poignant detail on the whole album is the cascade of pet names that the interlocutors use on this track: ‘my firefly’, ‘my little hawk’, ‘my little dove’, ‘my star in the sky’. Each name is an unquantifiable container of affection, and the sheer number of them attests to an excess of love (in a manner that reminds me of the 99 names of Allah, as well as, again, Ginsberg’s patriotic/pantheistic prayer in ‘Wichita Vortex Sutra’). Yet, in naming the unnameable, they also function as a defence mechanism; they pad out the unbearable sadness of the dialogue and help carry the burden of the reality of death, which cannot be fully articulated even in the repeated mantra: ‘We’re all gonna die’. As such, this catalogue of birds fills the bedside silence like the thud of a thousand cardinals hitting a thousand windows; the impossibility of understanding is acknowledged, and this can be as much a source of despair as of redemption.

This is why I can listen to Carrie & Lowell while I still find parts of Björk’s Vulnicura hard to stomach. On Vulnicura, Björk conjures up all her superhuman skills and powers, all her past victories, all her conquered ‘emotional landscapes’, to turn them in fury on the man who ‘betrayed his own heart’ and ‘corrupted that organ’. The music suggests self-possession and invention, while the words seem to attempt a potent and poetic ‘dissection’ (as the cliché goes) of the end of her relationship. And yet there is a tragic and hyperbolic desperation to lines like ‘Family was always our sacred mutual mission/Which you abandoned’ or ‘Is there a place/Where I can pay respects/For the death of my family?’ which undermines any sense of self-possession. I could understand these lines howled into a chamber of noise, or muttered brokenly against an insubstantial piano line, but the sophistication of the production suggests successful expression whereas the lyrics seem to scream their own failure to express. In contrast, for me, the iconography of Carrie & Lowell is a testament to the necessary failure of Sufjan’s songs to straightforwardly express or explain his grief, just as we must accept that we will necessarily fail to know anything about the real Carrie, or her relationship with her son.
Posted by thom at 21:31:00