Beach House remain the most inscrutable of bands: their music uncannily perfect but very difficult to write about. Nevertheless, listening to Depression Cherry as I rewatched Twin Peaks among the lonesome smokestacks and Grimm woodland kitsch of post-industrial Saxony (and after seeing Xiu Xiu perform their version of the soundtrack in Leipzig), I was affirmed in my belief that Beach House are one of the most properly ‘Lynchian’ of bands. It isn’t just that the talismanic title hook of the suggestively titled ‘Beyond Love’ is the distillation of every Julee Cruise performance in the TV show, nor that this moment always takes me back to the band’s quotation (back on Teen Dream) of the ‘Giant’ who appears in the middle of Cruise’s most pivotal cameo in the second season (probably the climactic moment of the whole series): ‘It is happening again. It is happening again.’ 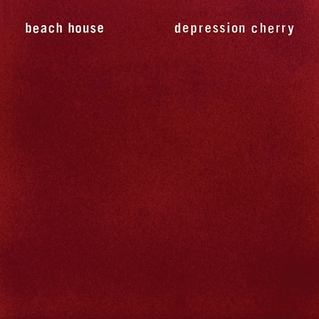 In pursuing the ‘Lynchian’ aspects of Beach House, I couldn’t help but return to the old cliché of ‘dream pop’, which I actually think is as good a route as any into Depression Cherry. We might ask what the term ‘dream pop’ actually means? Is it something to do with the indistinctness — the ‘soft focus’ — of the various elements (an imperfect visual analogy), or rather with the obtuseness of the lyrics? Does it concern a lullaby-like gentleness, mixed with some sort of surrealist dimension? As with the 4AD-style ’80s aesthetic that Beach House renovate, there is a particular dream logic at work here that relates to the way the voice inhabits and interacts with the rest of the track.

While my recent analyses of pop songs have hinged on the idea of musical events being initiated by voice or instruments/production as part of a balanced or asymmetric power dynamic, Beach House’s music appears to be governed by the kind of inescapable but indescribable dream logic that drives some of Lynch’s work. Victoria Legrand’s voice is passive, passionless, she moves through the songs with a frictionless ease, and without any clear motive; however, she is not powerless, buoyed along by a propulsive beat or groove. Her voice interacts with its instrumental surroundings to effect clear structural moments, but there is a somnambulistic quality to both: the songs follow their own internal logic, which appears both perfect and unparsable, resulting in very unpredictable sequences of events that nevertheless feel logical and unavoidable. Metres and pulses are vague, choruses become verses without us noticing, backing vocals enter on unmarked phrases and follow new lines of abstraction into new textural planes that are nevertheless steeped in an intense feeling of déjà vu: ‘It is happening again’.

The album’s opener, ‘Levitation’, is a perfect illustration of the feeling of slow motion that the duo creates: moving both forwards and backwards while remaining locked in place. Melodies and progressions often feel like they’re appearing back-to-front or skipping beats, but every new development appears so smoothly and naturally that it cannot be questioned: it has the internal integrity of dream logic. The result is a feeling of foregone conclusion — of hearing something unravel and knowing that you know how it ends, that you’ve heard it all before, but finding it impossible to actually say what the conclusion will be. Déjà entendu: a song already sung. And this dream logic carries with it all the eroticism — the intense desire for the inevitable consummation — but also the dread that dreams entail. My favourite example of this intangible dread is on ‘10:37’, in which the melodic bass gently menaces the voice, purely through its slight separateness (in production and rhythmic cadence), giving the sense that something is being smothered or repressed: “Where you go/She casts no shadow/Still you know she’s near”.


The final key to the dream logic that is particular to Depression Cherry is Legrand’s vocal breadth from song to song. On earlier albums, her voice had an androgyny that gave a fascinating ambiguity to her vocal presence, but this is added to here by an astonishing extension into her upper register, into breathier vocal timbres and production tricks (most strikingly on the year’s best My Bloody Valentine impression, ‘Sparks’) which make more ‘classic Beach House’ tracks, like ‘Space Song’, appear as something of a shock. The album is short enough to blend into one long, fitful snooze; however, Legrand’s face changes several times in this duration, even if every new face is also eerily familiar.
Posted by thom at 19:02:00