There’s a scene that’s common to horror movies of the supernatural variety. A protagonist arrives at a strange location, perhaps lured by weird sounds or local rumours, or the readings from some scientific device. Venturing towards the source of the disturbance, through an abandoned building, forest or cavern, they suddenly arrive at a captivating scene. Perhaps there are glowing coloured lights or webs of pink ectoplasm. Perhaps there are arcs of books and candlesticks suspended in the air. Perhaps there’s a silent audience of a thousand woodland creatures, similarly captivated. And at the centre of all this, there’s a ghostly figure or figures — perhaps a woman or a group of children — in glowing pale attire.

The protagonist, along with the camera, watches the figures in their self-absorbed state. Perhaps they are weeping or singing or playing. Perhaps they are repeating some tender scene, over and over. Perhaps they are drifting, lost in thought, murmuring some half-forgotten phrase. The protagonist is mesmerised by the beauty and sadness of the scene, and cannot help but approach the figure. Suddenly, their head whips round and their eyes lock onto the camera — big and black and empty — lips stretching into a snarl, raised hands revealing claws. The idyllic vision curdles and collapses around the protagonist as they turn and run, the ghostly figure giving chase. It is then as if the whole landscape is trying to prevent their escape: books flying off shelves, gnarled roots grasping at ankles, clouds of bats billowing from possible exits. And the ghostly figure is suddenly everywhere, reappearing at every turn, constantly both behind and in front of the fleeing protagonist; the brambles are her fingers and the moon is her eye. And from that moment on, the ghost is no longer consigned to a gothic set piece, but can appear anywhere: under the bed, on the telephone, in the mirror of the school toilets, on a television screen, in dreams. 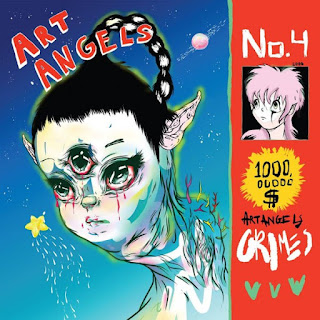 For me, this pivotal moment captures the shift between Grimes’s previous album Visions and Art Angels. As someone who writes a lot about voice, I can’t write about Claire Boucher’s music without focusing on her unique vocals, the way they are produced and positioned within the tracks. On Visions, the vocals dwelt within the extraordinary alien environments of the tracks without disturbing them. Wrapped in reverb and set far back behind the solid bass stalagmites and fleshy outgrowths of synth, we’d glimpse the ghostly Grimes skipping in circles with a sisterhood of dopplegangers, reclining by a moon lake, talking to trees or humming sweet hexes. The voices were indistinct and the melodies tripped in closed roundelays or meshed in airy canons. The spine-tingling terror of ‘Oblivion’, with its ‘See you on a dark night’ refrain, came from the feeling that the distant vocal was being overheard: a voice carried on the wind, bearing dark threats in its childlike chant.

My immediate reaction on hearing Art Angels for the first time was that she’s seen us. Perhaps this shift really begins with ‘Scream’, with the sighing, groaning rap by Aristophanes (in a language I don’t understand) and the titular howl oozing pure vocal noise, while mirroring Boucher’s translucent cocoon of reverb and protean shifts in timbre and register. From there on, my experience of the record is one of being pursued through a series of collapsing tracks by Grimes as grinning, mocking poltergeist. The pointed second-person address of the songs, as well as the unprecedented clarity of the lyrics, give her a new outward focus. She suffuses the musical space with her voice, appearing suddenly at unexpected registers, reflected in cracked mirrors or dividing into three. The vengeful ‘Flesh Without Blood’ and ‘Kill V. Maim’ are still my personal highlights. The extraordinary, incoherent hook that launches the chorus of the former was, for me, the most fascinating and disquieting sound of the year. At the same time, the the latter toys with the listener in a delightfully vicious manner, with the voice posing as a faux-naïve pop performance (“But I’m only a man and I do what I can…”) before the violent lycanthropic transformation that launches the bridge. The vocal appears to hail down fizzing high-hats on the guitar riff from above, like a cheerleader firestorm, before squeezing into another dimension on ‘Are you going to the party? Are you going to the show?’.


Art Angels is not all fury and violence of course, but throughout I have a strong sense of the vocal being able to travel through the tracks and bend them to her will. In contrast to the vivid landscaping of Visions’s beats, much of Art Angels is composed of guitar-led pop textures (reminiscent, perhaps, of Taylor Swift) that seem to melt as the vocal bores through them. In some senses, the album is only a few small steps from Carly Rae Jepsen (see previous post). The key difference is the vocal production, which remains as incorporeal as ever. Boucher’s vocal recalls the pitch-shifted vocal fragment in a dance remix — re-sampled and re-processed so many times that it begins to disintegrate — but emancipated and set loose in the mix. Boucher is the unquiet spirit of the high end, the avenging angel of the treble frequencies, that no low-pass filter can exorcise. She descends with an artillery of hissing percussion and leaves a gaseous wash of reverb in her wake. The shift from dance track to pop song concerns the power of the vocal over its environment; here, the becoming-pop of Grimes is catalysed by a kind of invasion of the DAW, with the vocal as marauding virus.


More generally, Grimes increasingly reminds me of other female voices who have occupied (male) musical territories in unique ways: voices like Kim Deal of the Breeders and Kate Bush (who is channelled with uncanny clarity on ‘Belly of the Beat’). So much music involves the containment of women’s voices, or the chopping up and sampling of divas into single phrases emblematic of one-note emotion. The excitement of listening to Art Angels was, for me, the excitement of hearing one of these voices moving diagonally through the pop prison and making every one of its surfaces vibrate.
Posted by thom at 15:29:00