For all my attempts to expand my musical horizons over the last few years, my spirit genre remains indiepop. Perhaps it will always be thus; I feel a weird affinity for a certain set of sounds — or perhaps its more a relationship between sounds — that can still seduce me wherever they arise. The Go! Team had already explored this territory as part of the more multi-faceted retro fantasia of their previous albums (Rolling Blackouts’ ‘Buy Nothing Day’ and ‘Secretary Song’ are obvious precedents) but on The Scene Between, they’ve gone full twee. For me, the result is nine achingly poignant time capsules from my fantasy adolescence (a parallel universe that can be loosely dated around 10 years before my actual adolescence; it opened up around the time I first saw Donnie Darko in 2002, and collapsed in on itself around the time I saw the Pixies play Reading in 2005). 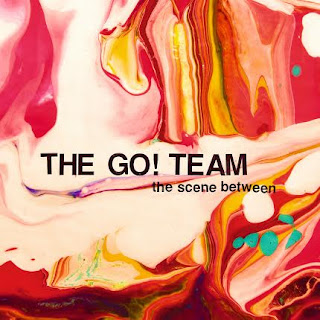 The Scene Between is a panorama of perfect structures. While the vocalist, instrumental forces and stylistic touchstones vary from track to track, the ubiquitous wall-of-sound production makes each self-contained construction seem to stretch away towards a single horizon. I’ve previously described the Go! Team’s distinct production style as a kind of mediating device — the equivalent of radio crackle or the frame of a television screen — which presents all of their channel-hopping transmissions as emanating from the same fantasy source. However, the application of this device on The Scene Between feels less knowing; rather than just acting as the glitter glue in a retro scrapbook, its primary role is in removing some of the personality from the individual songs, and helping them to appear outside of history and authorship.

The guest singers are somewhat indistinguishable, as are many of the individual elements of the production, even as diverse references to shoegaze and early hip hop, US alt-rock and UK twee pop are hurled out of the squall. The whining, keening vocals on ‘Blowtorch’ remind me of staying up late to watch early Smashing Pumpkins and Yo La Tengo videos on 120 Minutes (which aired in the UK at 1am), framed (as then) by blasts of sampladelia. Beach House’s Depression Cherry (see previous post) might have given us the year’s best My Bloody Valentine impression, in the form of ‘Sparks’, but The Scene Between comes in a close second with ‘Her Last Wave’. The references even extend into the ’00s, with the distinctly early-Sufjan/Arcade-Fire-style polyphonic spree, ‘The Art Of Getting By’.


What unites the album isn’t so much its own imagined past — an aesthetically perfect childhood of felt-tip ninjas and cartoon dinosaurs with boomboxes — but a certain indie/alt attitude, preserved through changing musical styles, for which the mediating production is a proxy. For me, this is about a celebration of heterogeneity and imperfection. The female vocalists, many of them singing in English with non-native accents, are set deep within the track; the key to this musical attitude is that, while the voices don’t attempt to impose their power on the rest of the track, the songs are nevertheless vocally directed. The quintessential twee pop feature is the ‘girly’ voice singing non-linguistic melodic motifs — ‘oo’, ‘la la la’, ‘whoa’, etc. — that introduce new structural sections or instrumental riffs. Similarly, the voices on The Scene Between effortlessly launch ecstatic choruses and corral rousing codas from amidst a ragged swirl of noise. For me, it's still a utopian attitude, as it was when local indie scenes birthed hundreds of distinctly unmacho girl-fronted rock groups, many of whom revelled in the queerness that this suggested. (In a past essay, I talked about this attitude (with particular reference to Satomi Matsuzaki, who was a guest vocalist on the last Go! Team album) in terms of ‘minoritarian’ politics…)

In this sense, I find myself thinking about the album’s title. The Go! Team recreate a ‘scene’, disparate in time and location, through simulacra that emphasise both their common similarities and their differences. It is posited as a scene between scenes — an oppositional or hidden scene — that might best be understood as ‘anti-rock’ (with ‘rock’ standing in for straight, male vocal power). There is certainly a curatorial aspect to all this; for me, Ian Parton is a clear analogue to A. G. Cook (whose own simulacra I adore), and there’s a lot of similarities to their approach (as well as to possible critiques concerning their roles as white male auteurs working in overtly feminine, often non-white musical styles).


At the same time though, I can’t understand reviews that focus on Parton as the single force behind The Scene Between, since I’d find it impossible to hear all these songs as the product of one individual. When a group of musicians disappear behind a broader meditation on a musical aesthetic, moment or attitude, there is no need to go seeking a single curatorial voice in their place. I’m more interested in the record-as-landscape, as a ‘scene’ populated with painstaking reconstructions, and the underlying spirit that unites them all. After all, my musical adolescence was no less real just because I listened and related mainly to music from 10–15 years prior. At the same time, every scene is held together by its own fantasy. Music helps make reality fantastical, and that reality was already fantasy anyway (just ask Slavoj Žižek). Albums like The Scene Between just allow us a little distance: to survey a beloved environment that might have become invisible through over-familiarity, and thus come to recognise it again.


From the wall to the window,
And the world between,
What we are, what we turn to,
What it really means
— 'The Scene Between'
Posted by thom at 16:05:00