This album was the soundtrack to one of the most beautiful autumns of my life, beneath the resplendent foliage of Plauen’s wide, quiet streets and sprawling Stadtwald. Like so much of Owen Ashworth’s music, it’s small-town music, but it’s the first time that I’ve ever really lived somewhere that fits this bill. Similarly to Sufjan (see previous post), Nephew in the Wild finds redemption in details, although this functions in a very different way.

In addition, as in the case of the Sufjan album, the Pitchfork review of this record really pissed me off. One line in particular: the reviewer lists the ‘hallmarks of [Ashworth’s] sound’ as ‘twinkling melodies’ and ‘sustained minor chords’, even though there are hardly any minor chords on this or any Ashworth record. It may seem like I'm being awfully pedantic here, but this is important because, for me, one of the actual hallmarks of his sound is precisely this absence of minor chords. While the use of technical jargon is by no means necessary for music criticism, it seems a little perverse for a reviewer to choose to deploy a technical term like this in such an utterly erroneous way, and I think it suggests a rather cursory engagement on their part. (Perhaps I’m just aggrieved at the Pitchfork review for employing what is now my most hated review cliché: ‘[Insert album name] feels like a logical progression from their past work’. Euuurrrgh, ban this filth!) 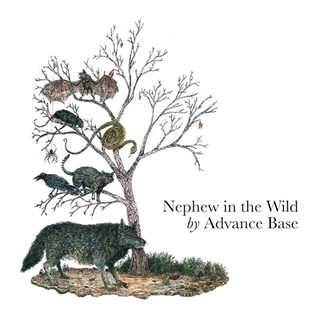 What Ashworth does on Nephew in the Wild, as on previous records, is deliver concise epistolary stories within a kind of ‘deadpan’ sonic medium of organs, electric pianos and drum machines. I’ve described his previous project —Casiotone for the Painfully Alone — in terms of voicemail messages, on which the cycling of major key harmonies (or ‘pre-recorded’ progressions) added to a sense of detachment, or the performative ‘withholding’ of a composed message, suggesting currents of untraceable feeling beneath. While his Advance Base songs switch similarly between first-, second- and third-person perspectives, there is a greater sense of authority in the lyrics, which tends to shift the focus from the singing voice itself onto the people it describes or addresses (with the understandable exception of Jody Weinmann’s guest vocal on ‘My Love For You Is Like A Puppy Underfoot’).

As with so many of Ashworth’s songs, the record catalogues vulnerable people, often distinctly underprivileged people, as they endure (or are broken by) the indignities and injustices of life: the marginalised protagonists of ‘Pamela’ and ‘Summon Satan’, the absent title character in ‘Nephew in the Wild’ and the absent addressee in ‘Trisha Please Come Home’. Alongside these songs are more mundane episodes that nevertheless hide a similar sense of the burden of the world. The effect of Ashworth’s deadpan settings — the warm but slightly distant glow of the chord progressions as they shed a momentary light on an individual in crisis — is one of levelling. However large or small the problems faced in these songs, they are all real and important to the protagonist in questions, and worthy of note.


Ashworth has always been adept at capturing the apparently insignificant moments of panic, anxiety or sadness that can bring our worlds crashing down. On Nephew in the Wild, the result is one of incredible empathy and tenderness. It is a rejection of the paralysing narcissistic guilt that is so common to contemporary artistic voices, at once bemoaning and disavowing their own #FirstWorldProblems, the most prominent being their own powerlessness in the face of injustice. Instead, Ashworth’s snapshots hint at a universal acknowledgement of the suffering of the world, which is for everyone singular and significant. This is most apparent in the shift from the holiday malaise of ‘Christmas in Milwaukee’ to the horrific tragedy of ‘Summon Satan’. While the similarity in tone of these two settings might once have sounded callous, it now sounds deeply compassionate.

Throughout all of this, the sustained major chords represent the life, hope and desire for happiness that underlines all of these songs. Not just a disinterested medium for the communication of a story — like a news report or radio interview — these songs offer a unique response to what is one of the fundamental questions in my recent research project: ‘Why sing?’. In this case, the very singing of these episodes is an affirmation of their importance, among all the tragic and banal events that unfold across the world every day, and this is why they are sung in a major key. For me, the clearest example of this is ‘The Only Other Girl From Back Home’, which describes a relationship between two friends in just such terms: the need to have someone to speak to, if only to affirm the value of one’s speech, or one’s own ability to articulate one’s experiences.


A number of reviews singled out the final track, ‘Kitty Winn’, for comment and praise, due to its ‘autobiographical’ content. While I like the track, this pathological need for the critic to return to the artist’s bio in order to frame the rest of the record is particularly inappropriate in this case, given Ashworth’s clear desire to act as a musical medium for his characters’ stories. As ever, the stories themselves are linked by themes that could easily be heard psychoanalytically (in this case, neuroses relating to unfit parenthood). However, we won’t hear these if we spend all our time listening for the ‘expressivity’ in Ashworth’s voice, or waiting for him to finally start writing songs about writing songs or touring.
Posted by thom at 15:20:00