Of all the artists to emerge in the mid ’00s, under the vague ‘indie folk’ umbrella, Joanna Newsom’s music has remained the most consistently interested in actual (Anglo-American) folk traditions. This is not merely a result of lyrics that pastiche traditional verse styles, or her dogged preference for acoustic instruments; it is more to do with a modality of the musico-poetic voice, which distinguishes Newsom from the parallel ‘singer-songwriter’/‘acoustic’ tradition that emerged from the ‘rockification’ of the ’60s folk revival. 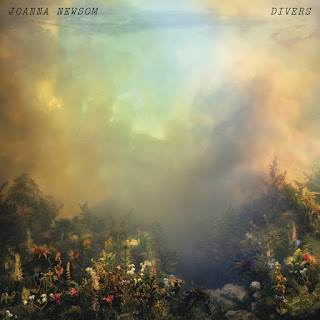 At the same time though, Divers follows 2010’s Have One On Me in its exploration of the grey areas surrounding this far-from-perfect distinction. While Ys (2006) cast Newsom as epic poet, whose 16-minute sagas swept up a hearthside shadowplay of supple strings, the later two albums mix different verse forms, different voices, different types of storytelling. Nestled at the centre of Divers are two simple folk songs, the traditional ‘Same Old Man’ and the original ‘The Things I Say’, which nevertheless perfectly captures the off-kilter simplicity of a good folk tune. The inclusion of these strophic numbers (a single tune, functioning as a placeholder for successive lyrical stanzas) grounds Newsom’s vocals in this folk modality; these songs are voice-led, but vocal ‘expression’ is nevertheless subordinated to narrative flow. Songs like these decentre and universalise the singing ‘I’; the folk tune is a ‘commons’, free for all to occupy and use.

Newsom’s longer-form song structures remain within this vocal modality, using folk formulae (one-, two- or four-line melody) to tell stories. At its most basic, this approach allows her to freely extend and contract the melodic syntax of verse-chorus structures to imprint them with a single narrative shape. In this way, ‘You Will Not Take My Heart Alive’, the track that follows ‘Same Old Man’, flows straight on from the preceding track in terms of key, tempo, metre and even lyrical syntax, but it sounds like an animation of the static scene painted in the previous song. Similarly, ‘Waltz of the 101st Lightborne’ and ‘Divers’ hide relatively simple melodic structures beneath an extraordinarily powerful vocal (not in terms of timbre or sentiment, but in terms of the voice’s relationship to the rest of the song), giving the impression that every alternation between ‘verse’ and ‘chorus’ is purely an effect of the flow of the narrative as it is told, or of the extraordinary nuance of Newsom’s voice as she tells it.


In this regard, Newsom reminds me far more of Joni Mitchell (especially in her late-’70s period) than someone like Leonard Cohen, even if the actual lyrical content would suggest otherwise. Like Joni, Newsom’s lyrics have a quasi-modernist density to them (just marvel at the sheer number of parentheses on the lyrics sheet); the complexity of her song structures arise from the voice’s application of this literary wordiness to the folk ballad modality, necessitating digressions into subsections, audible epigrams and postscripts, circular structures in which parenthetical episodes are bookended by rondo refrains, etc. This tendency is perhaps clearest in the four tracks that begin the album. Both ‘Sapokanikan’ and ‘Leaving The City’ begin with strong initial themes that are quickly superseded by more flexible melodic formulae as the songs veer off in new directions, never to return. Meanwhile, the gorgeous opener ‘Anecdotes’ has an extraordinary cyclical structure (a microcosm of the album’s cyclical structure, perhaps); fittingly, it is a perfect demonstration of Newsom’s music as pure rhetoric.

Unlike Joni’s streams-of-consciousness, which are always guided by an exceptional poetic logic, Newsom’s lyrics sometimes approach the ramblings of a mad visionary. They carry within them traces of the traditional or Romantic ballad, but the ‘telling’ itself tends to undercut the content, marooning her characters and images on islands of fleeting lucidity. This is even more apparent on Divers, due to the addition of a new structural trope that appears on all three opening songs: a kind of ‘breathless rant’ that charges through lyrical content, borne on a drastically diminished, endlessly looping melodic phrase or fragment. On ‘Leaving The City’, this fragment is even shorter than a single bar, and ends up syncopated against the rest of the texture, increasing its feeling of pure rhetoric urgency. Often, the meaning of the actual words seems secondary to this rhetorical flow. Poised expository phrases spiral into a proliferating tangle of subclauses, before emerging in curlicues of medievalism (‘Leaving The City’) or Americana (‘Goose Eggs’). Vordersatz-Fortspinnung-Epilog.


While it may seem easy for the listener to lose themselves in these increasingly labyrinthine anecdotes, the album’s narrative thread is sustained by the sheer dynamism of the vocal, as well as the panoramic arrangements. Much of the semantic weight is carried by these arrangements, which trail the voice in an ever-shifting phantasmagoria of technicolour imagery. The spectacular chamber landscapes of ‘Anecdotes’, provided by Nico Muhly, include a long time-lapse sequence from idyllic woodwind to shimmering sci-fi synths, giving overarching momentum to the ‘rant’ that carries the vocal to the spine-tingling recapitulation. Here and throughout the record, the approach to arrangements evokes the late 19th/early 20th-century classical trend for illuminating (wordless) folk melodies with a shifting backdrop of orchestral colour plates.

The smooth transition from ‘Anecdotes’ to ‘Sapokanikan’ establishes Divers as Newsom’s most integrated album yet, with each track feeling like another cantus in one long epic. This effect is amplified by the similarities between the first track and the final track, ‘Time, As A Symptom’, with the final track even transitioning back smoothly into the first: a reflection of the album’s obsession with time. In this way, the album invites itself to be heard as a single progression, and for me, this overall narrative is articulated by the moments in which Newsom shifts from a folk modality towards a more ‘I’-centred ‘singer-songwriter’ modality. Most of all, the repeated title refrain of ‘You Will Not Take My Heart Alive’, which arrests the tempo of that song, also feels like an incursion of defensiveness and vulnerability into the authorial flow of the rest of the album. The phrase is repeated so many times that it looms out of the record, as if a fourth wall has been breached somewhere. Equally, ‘Divers’ and ‘Pin-Light Bent’ bring a more lyrical pace to the second half of the album. While the former plays with certain lovelorn folk tropes, the latter is strikingly insular and expressive, as if the balladeer has become lost in her own thoughts.


This tension is resolved by the superb final track, ‘Time, As A Symptom’. The vocal distances itself from the ‘I’ of the previous song by shifting briefly to the third person — ‘The task was the hardest thing she’d ever do’ — as if reintegrating her outburst into the broader narrative. In contrast to the rest of the album, this song is built on a single repeated three-chord progression. Weirdly, this allows it to register as a kind of slowed-down version of one of the ‘breathless rants’ that characterise the first half of the album, as if the vocal is returning to one of its more circuitous visions with a new sense of self-understanding. This too is the effect of the refrain, ‘joy of life’, that comes to crowns every new phrase, as if it were the final destination of every winding sentence, the final encapsulation of every fugitive thought.

It is a conclusion that contains both joy and terror. There is a desperation behind this apparent reduction of all Newsom’s rhetorical power — the dense poetic tangle with which she embraces the world — to a single irreducible phrase, borne on a single progression that washes back and forth like the surf. Hence, the final ‘breathless rant’ of the record, the voice’s lyrical flow contracting into a syncopated chant, attempting to escape the unbearable meaninglessness of this cosmic aporia: ‘Transcend!’

And the record loops back to the beginning…
Posted by thom at 22:01:00