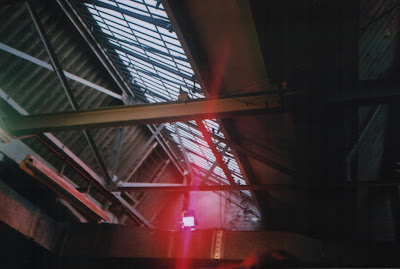 Friday's almost perfect line-up built up to performances from Lovvers and Male Bonding. Both bands share a cleanness to their noise, edges deceptively well-defined, rendering each melodious riff all the more potent, while that 'tropical' guitar gilds the sound with arcs of sharp colour, like glowing tubes of sound. These bands don't spill - they pour their energy and chemistry into moulds of strange shape, but never stray over the lines.


Personal highlight Munch Munch achieve a very similar effect without guitars. Their keyboards scrape up against each other in a pool of boiling cymbals, leaving the vocals - doubled and sometimes tripled in plastic octaves - to arc through the texture rainbow-style. Brightonian young folks Cold Pumas presented more obsessive studies in glowing curves, throwing two or more spinning polygonal motives together into their sonic dynamo and feeling their mutual attraction or repulsion.

These bands were well-complimented by the video projection backing the larger stage, which showed objects of boldly contrasting shape, colour and texture being juxtaposed, pushed, rubbed and smashed together, the qualities of each given emphasis by their respective clashes.


Elsewhere, dream-peddling duo Family suffered slightly from being first on, caught in the sunlight, while their vocals and laptop set-up presented the perennial problem of a comparable lack of onstage physical gesture, which can detract from the 'liveness' of a live show. The Human Race, in contrast, glossed some admirably ramshackle riffs - stuffing, or wires, or entrails pouring out - with the kind of ranting, embittered, monodic vocals that demand comparison with early, puritanical post-punk. Acts like this cast a slightly uneasy shadow over the apparently intuitive co-existence of the often paradoxical legacy of punk and an event so self-conscious, involving art which often verged on the precious.


Saturday's line-up, spanning daylight and darkness, was certainly more expansive. I arrived in time for three electronic outfits, markedly different in tone and allusion, beginning with the pixelated battle hymns of School Tour and ending with the postcard idylls of Ghost Hunter.


By far the most engaging of the three were Hype Williams, and not only because they were playing on the darker, moodier stage, used more live instrumentation and burned incense. They built up their dark tracks with sombre intent, playing two droning keyboards off against each other while a drum machine ricocheted violently, the duo taking turns to apply their cold, detached vocals over the top.


Slowcoaches received automatic respect from the audience for their convincing reincarnation of a familiar, bratty punk sound, although their live set-up sacrificed some of the delectable buzz of the recorded tracks I've heard. In general, the potentially ingenious set-up of two adjacent stages alternating within a constant stream of performances was slightly affected by frequent issues with equipment, always rectified but occasionally eating annoyingly into the otherwise perfect half-hour slots for each band.

The final four bands picked up where Male Bonding had left off the previous evening. Fair Ohs represented the closest that the festival got to the recent US sea/surf/summer obsession, building Abe Vigoda-style patterns into full-scale pop songs, sporting names like 'Eden Rock', 'Summer Lake' and 'Almost Island' with total joyful justification.


Dual-guitar outfit Please constructed and overturned successive riffs with unpredictable counter-gestures, producing some highly alien contours, while Islet specialised in a cartoony kind of performance pop, both in their animated gestures and journeys, and in song structures which shift between outrageous ideas like frames in a comic strip. The band were, however, along with quite a large proportion of the line-up, culpable of a rather ambivalent attitude toward the audience, as well as a strange surfeit of seriousness. Many of the bands closed their sets without so much as a smile out front, and for an event encapsulating a musical moment so whimsical and colourful, there was always a little bit too much sternness on stage.

This certainly wasn't true of the final act and highlight of the day, Cleckhuddersfax, party incarnate, who managed to engineer the sort of jolting, noisy mess which is impossible to stand still to, and for once the moshing turned to proper dancing across the crowd. 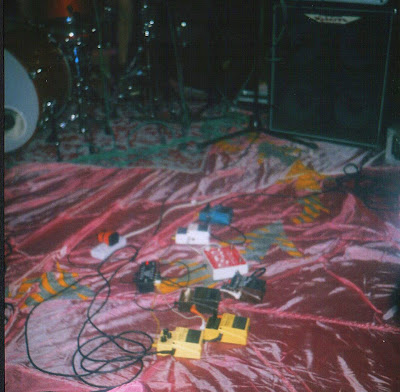 If the Upset the Rhythm aesthetic has the monopoly on the 'best and brightest of the UK's music underground' then it's in good shape, for all its debts to Los Angeles. The enduring interest in sound demonstrated by the festival - the careful colouring-in of thrash and noise and fuzz - as well as a fundamental joie de vivre suggests a climate in which individual DIY experimentation will bear all the tastiest fruits, while lyrical content, political attitude or historic revivalism take a backseat. However, more probably, the label and the line-up represent a burgeoning scene, the kind which will gain momentum the more it can bear to recognise itself, which while representing a resourceful and sociable proportion of British underground music, should not preclude experimentation in other, possibly less well-rooted, directions. 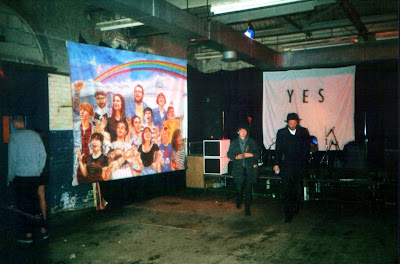