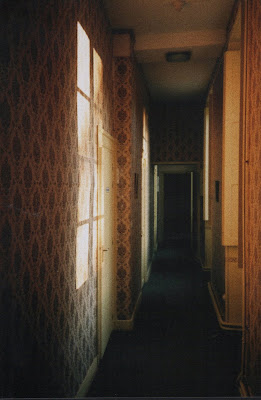 For one thing, the prize-winning second album has always been my least favourite of his three albums - I maintain that it is the least interesting musically - but on top of that, most of the band's output hasn't affected me nearly as much as a few of the guest spots and collaborations on which that voice has appeared since its rise to fame. I've always felt - whether on Hercules & Love Affair's 'Blind', CocoRosie's 'Beautiful Boyz', even Nico Muhly's 'Keep In Touch' - Antony provides more than just an inimitable vocal timbre or character, he brings to the work a whole palette of associations - his very own semantic frame, in fact. Antony's role on these tracks goes beyond sonic source, narrator, singer, performer, performing body, performed character, media persona etc. etc. - he brings his very own mode of discourse.

The source of all this, often intensified or clarified through its appearance in different contexts, can be located on the Johnsons' studio albums (particularly, on reconsideration,  I Am A Bird Now). Obviously, gender subversion and androgyny has a lot to do with it, but I think there are more interesting, less discussed issues at work. I will try to explore these under the three summary headings: Gothic, Kitsch and Kink.

'And yet that terror was not fright, but a tremulous delight/
And a feeling undefined, springing from a darkened mind.'

There have always been Gothic elements to Antony's music since his first records, not just via his early links with David Tibet, but also in relation to old skool 19th-century literary and pictorial Gothic revivalism. His first EP had him falling 'In Love With A Dead Boy', while his second centred on a setting of Poe's 'The Lake', and the simple piano accompaniment of that track illustrates well the Gothic side to his music. The piano, more than any other instrument (exact maybe the organ), evokes a sense of place - a room, large enough to fit a piano but small enough for it to be heard, a 'chamber' for chamber music. The interior in which Antony's piano stands, with its darkness and its coldness, is not a home. It is never safe, at least not in any kind of prosaic way. It is always lonely; Antony, wherever he show up, even duetting with Björk, is always, always alone. His songs, in scope and structure, are close and sedate. This room is a prison.

In other words, Antony invariably plays a Gothic heroine in his works. The keyword for everything he does (you see it countless times in reviews) is 'vulnerability' and, by means that I will discuss in a bit, he manages to come across as more vulnerable than any other musical artist (in history. Hyperbole?). He is the oppressed and imprisoned heroine, and he delights in his own captivity - his weakness, his isolation. He finds, in the vicious treatment of whatever patriarchal despot has exploited him, a way to explore the most fragile truths within himself. In true drag artist fashion, he gleefully appropriates the kind of stereotypes that Gothic fiction developed for its female protagonists, and he embodies them within his voice and words and music.

His most famous track, 'Hope There's Someone', is exemplary within this Gothic mode, in that he sings from beyond death. Making use of his singular, lonesome voice, rippling as it crosses some unseen threshold (of death or of identity), in this and other songs he becomes the 'Dead Boy' with whom he might once have been in love. And it's the sweetest, saddest representation of ghosthood that I've ever encountered, even sadder than Caspar (that bit in the movie when he gets to come back as a real boy just for one night. So sad!).

The Lake by Lin Miou

'Some of these mornings, bright and fair/
I thank God I'm free at last.'

I recently finished reading The Unbearable Lightness of Being, and when I say 'kitsch', I mean it in the sense that Kundera explores, as well as its contemporary aesthetic meanings. He writes that 'kitsch excludes everything...which is essentially unacceptable [in existence, in human life, in culture, in political ideals etc.]'. On all of Antony's records, I Am A Bird Now especially, the instrumentation that he uses has strong connotations of certain questionable musical 'genres', like easy listening, lounge music and smooth jazz. These timbral connotations are reinforced by (mostly) very simple, regular chord progressions, mainly keeping to major triads and keys, and supporting uncomplicated melodies. This is Antony's kitsch, a sound-world made up to resemble the most untroubled, unchallenging and artificial of musical genres, free of strong feelings either positive or negative, completely at ease with the status quo, basically wallpaper. The brilliance here is that nobody could be fooled by this reconstruction. Just as Antony could never really pass for a woman, so what we hear is an earnest, sometimes pitiful and always devastatingly revealing attempt to recompose a sedate, musical normalcy.

This state of affairs has various effects. On the one hand, it draws attention to the unreal nature of all kitsch; it shows it up as an opaque veneer, rather than a shallow and transparent pool. In this respect, Antony's music challenges a world that has no time for complexity or depth. Yet it also suggests a lot about the singer, and the character he represents. There is never any attempt at obfuscation on his part; his aesthetic is the very opposite of pretension. His desire to normalise what is so unique - his voice, his image, his lyrics and the psyche which they illuminate - exaggerates his vulnerability and the absolute freedom that he finds in relinquishing all power, while also magnifying every unworldly gesture and giving perfect credence and beauty to each bold fetish.

So when, on tracks like 'Hitler In My Heart' and 'Aeon', the 'kitsch' formula is broken, there is almost a sense that something is wrong, the sense of purpose is so great. The 'kitsch' ideal remains behind all Antony's work, and it means that on 'Blind' when he's being a disco diva, or on Rufus Wainwright's 'Old Whore's Diet' when he's playing a lecherous queen, we are as much disturbed as we are delighted that the inimitable voice has found musical idioms as transgressive as itself.

I Am a Bird Now - Antony Johnsons - Bird Guhl by Sonja.Niederhumer

'I accept and I collect upon my body/
The memories of your devotion.'

The final aspect of Antony's music that I want to discuss, because it feeds into the other two as much as it is created by them, is 'kinkiness'. Without pretending to have a comprehensive knowledge of the etiquette and jargon that surrounds 'non-normative sexual behaviour', I think it's safe to say that transgressive sexuality is right at the heart of the first two albums (and can be sensed behind the regressive daydreams of the third). Aside from the subversion of gender roles and identities, this mainly manifests itself in the kind of very candid BDSM fantasies that 'Cripple & The Starfish' and 'Fistful Of Love' provide.

Kinkiness is a topic that, while expressed rarely in alternative music because of particular attitudes towards the representation of sex in this kind of music, has been evoked recently by two others of my favourite artists. Wild Beasts, through the harnessing of the pantomime flamboyance of Hayden Thorpe's vocals, indulge in a powerful, knowing sexuality that is also kinky in its fantastical aspects, its narcissistic frankness and its supreme decadence. Jamie Stewart (of Xiu Xiu) has, in his time, explored every sexual curiosity in the psychoanalyst's textbook, but he imbues his flashes of confrontational openness and nakedness with a constant, embittered sense of shame, and the propensity for great anger.

Antony, in contrast to these two, tears down all egotism in his expression of kinkiness in music, thanks to his already intense vulnerability. If the purpose of 'transgressive' sexual practices is to heighten intimacy, which Wikipedia assures me it is, then a song like 'Cripple & The Starfish' is the perfect lyrical and musical reflection of this. The keening lilt of the first chorus - 'It's true I always wanted love to be hurtful' - feels harmonically like a great opening up, exposing and shining, not recoiling. On its repeat - 'I am very happy, so please hit me' - it is a blissful mantra. By the climactic final chorus and its lyrical association with the perfectly soft yet infinitely regenerative starfish, it has escalated into an expression of great, elevated ecstasy.

Antony and the Johnsons - Cripple and the Starfish by S>A

These are, to date, some of the most powerful and unique aspects of Antony's music, and they help comprise the great weight of signification which is transported in the singer's voice whenever he collaborates or guests (how incredibly eloquent those wordless croons and moans on Muhly's piece!). Perhaps the arrival of Swansong next month will add another dimension of meaning to his sobbing vibrato. However, I think it's safe to say that nothing could divest that voice of any of the wealth of meaning that Antony, as musician and lyricist, has carefully and artfully created.

Antony & the Johnsons - Swanlights - out 11th October buy it