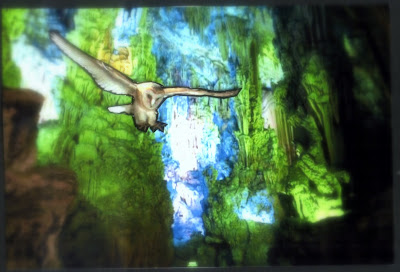 I had always considered both Former Ghosts and Zola Jesus to be 'sub-Xiu Xiu' acts, having approached Former Ghosts through Jamie Stewart's involvement, and thence Zola Jesus through Nika Rosa Danilova's own involvement in that project. Seeing them all together in a line-up which stressed their equal standing (with big 'AND's inserted between identically capitalised band names) seemed to confirm their musical affiliation, but in reality the two younger bands don't seem particularly interested in borrowing from Xiu Xiu's work. If Former Ghosts occasionally recall Xiu Xiu's sound, it's solely because of Stewart's own penchant for certain synth and drum machine timbres. No, these bands are more purist in their influences, digging right back to when synths became cold enough to solidify a new goth aesthetic.

Both support acts rely so deeply on their intricately layered strata of crystalline 4AD-style synth lines, and impossible drum crunches poking through like 25-year-old stalactites, that they opt to play these tracks in full from their onstage laptops. These are the fairy-lit caverns in which the singers place themselves, too delicate to touch or to re-sculpt. Unfortunately, the consequence of reproducing an entire electronic track mechanically onstage, without even the illusion of live re-creation, is to take the focus off it entirely - if it cannot be seen, the audience will take it for granted. The success of the performance will rely then on what is left.

For Zola Jesus, this meant Danilova - her presence and her voice. Of the three acts, she's been getting the most media focus over the last few months, but seeing her with a microphone on an empty stage, it was the first time I'd associated this attention with the public thirst for 'girls with synths' that has shaped British music over the last three years. With such acts, the emphasis is on the artist as theatrical personality - the relationship of them and their voice to the backing music, which can be creative, responsive or detached. The sounds that Zola Jesus works with rely on their coldness and their blankness to recall the earnestness of 80s (New) Romanticism and the dry-iced, soft-focused spectacle of the MTV sublime. Her voice aligns to this cold blankness perfectly; it is a deep, spacious and distant voice, and set within the vacuum of her unwavering synth pads, somewhere behind the vacuum of the empty stage, it cradles its own vacuum. As pure an exercise in synth goth as could be asked for, I couldn't help but feel that her distant vocal wanderings within the distant landscape of forgotten electronics are entirely without theatre or personality. Tellingly, she fluctuated between singing to herself and performing to the audience, between the esotericism of a Fever Ray and the defiance of a La Roux. Her burial within the non-existent backing track was so complete that I felt the attention should be elsewhere, that maybe we should be dancing. She was as caged and ghost-like as a faceless disco diva, but the music was slowed to a trance-like pace. In reality, such a void could still be fascinating if it were being created before us in real time - that's why everyone likes the new Horrors stuff - and perhaps Danilova really just needs to get another presence onstage with whom she can interact, although I fear she's still too in thrall to a retro aesthetic to properly strike an engaging attitude within her music.

Freddy Ruppert of Former Ghosts did take some steps towards an impression of liveness onstage. A small keyboard to play in some of the lead lines, a floor tom to flagellate and thereby take some possession of the beats, the Xiu Xiu frontman tangled around an electric guitar for a few numbers - these things do make a difference. In general, though, the arrangement was the same - tracks which played themselves in the background, and only Ruppert left in focus. Again, this placed great emphasis on the presentation of his vocal persona and its relationship to its sonic surroundings.

Without doubt, there are more levels to Former Ghosts' electronic textures than Zola Jesus's. Around the flat sheets and smooth beams of 80s synth, some grainier, grittier, more dynamic sounds have been tied. These tracks aren't all placid; on the recordings, a sudden rain of static or distant hammering of artillery can bring the songs to life, but without a real visual presence, such elements risk being flattened out onstage. However, I eventually decided that, despite this, Ruppert can strike an effective attitude within his live music, and while it didn't work all the time, when it did work it was very engaging. It relied on the fact that, unlike Danilova and Stewart, he actually has quite a small voice. Low in range, without force or extroversion, in recordings it is usually heard through clattering reverb, somewhere behind the glowing bars of electronics. Live, the fragility of this voice - in effective contrast with the flamboyant machismo of the singer's visual image - is all the more evident as part of a dialogue of oppression (or repression) with the enormous synth structures overhanging it. On new single 'Taurean Nature' in particular, I was impressed anew at the gentleness of Ruppert's part within an overall sound that I had always considered quite relentless.

Onstage, as on their records, some of the best moments occurred when Danilova took over vocals. In her new role as counter to Ruppert's fragility, she shone as an extension of the electronic textures against which he struggled. Her blank and booming voice cast her as a kind of faceless angel howling from the same white heights that Ruppert was unable to penetrate with his cowering presence. This was the kind of drama that Former Ghosts were able to conjure up at their best - more complex than the New Wave icons to whom they pay furious tribute, grander and more cinematic than the comparable personal dramas which form one key aspect of Xiu Xiu's aesthetic. For me, the one element which would most assist in this drama is the lyrics; if Freddy Ruppert is to embody the stage character which I think he aspires to, then the lyrics need to be both remarkable and audible - qualities which Xiu Xiu have learned to make full use of.

I think much of this specific criticism and speculation concerning the relationship between voice and electronics track came about simply because Xiu Xiu do it all so well. With an onstage laboratory of noisemakers and trees budding with gongs and cymbals, Jamie Stewart and Angela Seo manage to completely reconstruct each song in its own uniqueness. The band recognise the key elements of their music and its implied theatre, and they translate these effectively into a live experience: Stewart as protagonist, the dark machinery of each track as it whirrs onwards, the moments of rebellion and noise which derail these machines, sometimes with outbursts of nihilism, sometimes with disarming humanity.

To generalise, there are two main types of Xiu Xiu song, both dramatising violent resistance. There are those terrifying, nihilistic anthems to hopelessness which are swept along by swarms of drum clicks, within which gestures of resistance - counter-rhythms or screams or sweet but stillborn melodic motives - represent the furious thrashings of flailing humanity. Then there are those delicate, often guitar-led confessions, naked and too human, within which the moments of disruption come from the welling up of imposed self-hatred or the invasion of fatalistic circumstance. Seo and Stewart play out these roles between them; they use drum machines only as the bare bones of a live sound which trades each carefully engineered electronic occurrence for an equally caustic performed one - be it bird whistle, guitar squeal or overdriven Nintendo DS. If Seo plays the silent technician behind each dark track, the sprouting cymbals provide Stewart with the equipment to physically demonstrate his resistance, just as she is equipped to grind callously away at his tremulous guitar lines.

The band made the most of the brilliance of their most recent album, Dear God I Hate Myself, which is overbrimming with compositions ideally suited to this kind of dialogue. But on older tracks which might pre-date this live formula, Stewart is not afraid to re-compose. Their live version of 'Fabulous Muscles' set a howling gail of noise chasing each new unbearable sentiment. 'Sad Pony Guerilla Girl' was slowed to an even more painful tempo, and the central moment of masked violence was effectively suggested by some impenetrable vocal noises from Seo.

Apple for a Brain by killrockstars

Like the best bands, Xiu Xiu's sound transcends their recorded tracks and informs their live performances entirely, expanding eloquently on the same drama while using only two performers. For bands like Zola Jesus and Former Ghosts, who have forged an interesting and undeniably theatrical recorded style, it is not enough to transplant this directly to the stage. By attempting to preserve every original sound in a relayed backing track, many layers of intention, style and meaning will be lost. Live performance for such bands will only make sense after a process of translation, of finding theatrical equivalence for recorded effects - anything less than this will fail to do an original artist any justice.
Posted by thom at 22:46:00